Have you ever thought about who might actually be behind the screen when you’re playing your favorite first person shooter or MMO… or MMORPG… orrr ABCDEFG? *giggles* Think it’s some guy in high school still going through puberty? Well, I will have you know that princesses game, too! In fact, this is a tale of not one, but two princesses who are secretly super duper awesome gamer girls. Why secret? They don’t want to be known for their status; they just want to game and have an awesome time showing all of the boys and other girls who’s boss!

One night, Lady Addy and Lady Xandria got together and decided to play a couple of their favorite games. They gathered up some of their favorite snacks and snugglies, sporting matching t-shirts and sneakers by Wishes, and they played for hours and hours. By the way, the two texture-changing t-shirts and sneakers, along with a dress and two hair bows, are available in a gacha at the current rotation of ATP! The sneakers are the rare, and the rest of the items are commons, with six items total that you can snag for yourself!

So, during gaming breaks, the princesses decided to rough house a bit, because what princess doesn’t like to let off a little steam after a good game? p.o.s.e. has a great pose, called “Catch You,” that makes it look like one of you is going to literally catch the other – on their back! But what’s even funnier is when Princesses Xandria flailed through the air and landed on Princess Addy, Princess Addy didn’t like it one bit so she decided to corner Princess Xandria and picked her nose! p.o.s.e. also has another super silly pose called “Booger,” and it looks like exactly what it says. I had to post a really great picture of it below because it’s just too precious to only include in a slideshow, and it definitely deserved its own spot in this post! Yep… It comes with a green, sticky booger and everything! See, princesses are allowed to be silly. They don’t have to be prim and proper all the time… And they do have boogers. Well, at least Princess Xandria does! 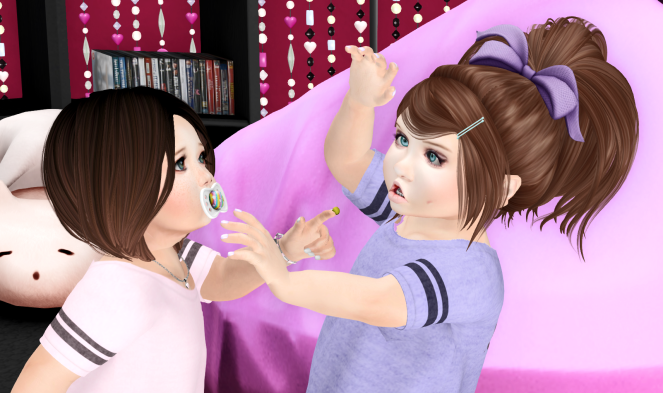 Lastly, p.o.s.e. also has a set of magnificent poses called “Little Diva” that contains three poses in one! You get the actual poses and the pack also comes with three separate pose balls with the poses inside so you can rez them out and place them anywhere you’d like. Princess Addy posed using the “Little Diva” poses, which were perfect for showing off the “Console Dress” by Wishes.

Your chariot awaits to the ATP event! It ends on August 31st, so empty out your royal piggy bank and take yourself on a shopping spree! ♛ Your Chariot Awaits! ♛

Here’s a quick breakdown of some of the items both of the princesses are wearing:

Second Life® and Linden Lab® are trademarks or registered trademarks of Linden Research, Inc. All rights reserved. No infringement is intended. Unicorns are real. ♥